David Foster Wallace, Infinite Jest, and being entertained to death 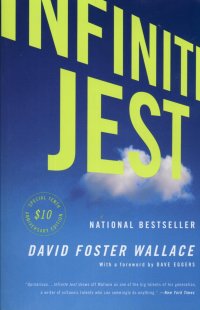 Last February marked the twentieth anniversary of the publication of David Foster Wallace’s Infinite Jest, considered by many critics one of the most significant American novels of the 20th century (it is also probably one of the least read, up there with Moby Dick!). One of the central plots of the novel revolves around the mysterious existence, in a not so distant future, of a film (“The Entertainment”) so enthralling that causes the death of anyone who watches it. This narrative device captured a central idea in the work of Wallace: we are being entertained to death. This dystopian future envisioned by Wallace seems to have come to fruition with the success and pervasiveness of smart phones and tablets, which make possible that we can be engaged or distracted at any time by texting, catching up with friends on Facebook, staying on top of what’s happening in the social media world on Twitter (which most of the time has little to do with what’s happening in the world), keeping track of sports’ scores, watching movies on Netflix, playing games, etc. Wallace’s vision of the future may be already here. Maybe there is no movie out there that can kill you, but there is a tool out there (smart phones) that are doing just the same… killing us slowly through constant, meaningless entertainment.

So, wait, if it seems that I agree with Wallace’s diagnostic of American society, what am I doing writing a blog about religion in popular culture? On an obvious level, I am interested in religion, and I also do like being entertained. I enjoy watching the latest Star Wars movie, or The Walking Dead, and analyzing them through a religious lens (Is there a God in The Walking Dead Universe? Is the Force the same as Qi?). At the same time, I like to “read” popular culture as a form of scripture. The term “scripture” is usually reserved to refer to the holy text of a particular religious tradition (the Bible, the Quran, and so on), but in his 1993 book What is Scripture? Wilfred Cantwell Smith warned us of the dangers of narrowly defining the term “scripture” in those terms.[1] While, as Smith argues, it is true that scripture has been interpreted in many religious traditions as texts inspired by a divine source that allows member of a particular faith to connect with what Smith defines as “the transcendent,” he also added a second characteristic of scripture, mainly, the fluid and intimate relationship that a particular community develops with a particular text. The introduction of this second characteristic of sacred texts allows Smith to shift our understanding of scripture from the text, which is no longer simply an object, to the relationship between the object and its interpreters. What matters is not only what the text says, but how its ongoing relationship, through time and space, evolves and changes with a community of believers. In his own words, “Their being scripture, once they had become so, has given them in the life of society and in personal piety a role rich, complex, and powerful.”

TV shows like The Leftovers, or The Walking Dead, I would argue, function as modern or popular forms of scripture in which the audience consumes them not only as a commercial product, but engages them (from informal conversations to online forums) in a search for meaning about important existential questions: Who are we? Why are we here? Is there meaning to human existence? Is there a God? What is the origin of evil? Shows like Lost, with its episode recaps, its own Wiki page, numerous online forums, and podcasts, were not only consumed, but read as scripture in need of interpretation, as the source of answers to our existence in this universe (what or where is the island?). Shows such as The Leftovers even include religious scholars such as Reza Aslan as consultants, and are trying to offer, using the language of popular culture, a cosmology in which there is a place for the supernatural phenomena that it is not explained by traditional religious views or modern science.

Using Popular Culture to Engage Students in the Classroom

David Foster Wallace may have been right that we are a society at risk of using entertainment as the ultimate goal of life. Entertainment, so to speak, has become the ultimate legal drug that can take away the pain (or so we think) of existence. I do believe Infinite Jest was prescient on his analysis of the reality we live now, but I also think that there is an opportunity there. The Buddhist Tantric tradition argues, “poison is the antidote of poison,” and I believe that using popular culture as means, and not as an end can be an effective way to engage people to discuss what I think are worthwhile subjects.

I teach a Religion in Popular Culture class at my university and the usual response that I get from fellow faculty members is “that sounds like fun,” or teaching that “must be fun,” and fun it is, but I also use it not as a way to have a great time with students (we can all be entertained during our class time!) but as a way to engage them. Popular Culture in my class is not an end in and of itself, it is a medium to get to important religious questions. I believe that using certain products of popular culture, such as the ones mentioned above, can help scholars and teachers engage students as well as the society at large in relevant discussions as to the nature and role of religion in contemporary society. A discussion of popular shows such as HBO’s True Detective and AMC’s The Walking Dead can be used to discuss philosophical existentialism and the death of God, and the use of mystery and unanswered questions in the TV show Lost can spark an interesting conversation about the human need for answers and meaning to our existential questions. Approaching certain elements of popular culture as a modern form of scripture, then, allows me to discuss important questions within the field of religious studies through a language that is approachable while also meaningful.

I guess, what I am trying to say here is that as much as I appreciate Wallace’s criticism in Infinite Jest of modern movies and TV as a form of empty entertainment, as mediums that peddle products that transform us into mindless consumers, I also see an opportunity to read some of its products as reflecting important concerns (intellectual, social, religious) that affect us as individuals as well as a society. Nonetheless, we should all keep a copy of Infinite Jest close by so we are reminded of the dangers of entertainment…

[1] I am rehashing here an argument that I have made on a previous post, but please indulge me for a second since I am trying to make a different point.

I am a scholar of Buddhism with a particular regional focus on Tibet and the Himalayas (Tibet, Nepal, Bhutan). I am an Assistant Professor of Religion at New College of Florida, where I teach courses on Buddhism, Tibetan Buddhism, Buddhist Contemplative Systems, Hinduism, and Asian Religions in general. I am also interested in the intersection of religion and popular culture and write about it in a blog.
Loading Comments...
%d bloggers like this: